The Big Island of Hawaii is an area of contrasts. Here are two itineraries for you to use as starting points for your own exploration of this strikingly beautiful and varied northern area of the Big Island. Both itineraries assume you are leaving from the Kailua-Kona area and driving north.

I drove this route in 1995, however the sights remain the same today. Proceeding north out of Kailua-Kona, take the Queen Kaahumnau Highway (#19) along the coast. More of that black lava rock desolation is experienced, but every once in awhile, just like an oasis appearing out of the waves of heat, a posh resort appears! Some are located between the highway and the coast, others are located inland. Once such coastal resort is the Mauna Lani Resort, consisting of a cluster of three hotels, a golf course, and a very nice small shopping mall. 950820.jpg (48788 bytes)Right in the middle of the golf course, is the Puako Petroglyph Archaeological Preserve, which offers some clues about the ancient Hawaiians, and their culture.

Once we get to the north coast of the Big Island (via highway #11 and #270), the tropical vegetation reappears once again. The sleepy town of Hawi makes for an interesting stop, and the Bamboo Restaurant serves a nice lunch in cool surroundings. We proceed to the other side of Hawi, and encounter a monument to King Kamehamehea I. We soon discover that the Big Island is where most of Hawaii’s royalty originate. We drive the road along the north coast 950825.jpg (52075 bytes)until it simply stops, we gaze out from the Pololu Valley Lookout over the spectacular view of the north coast. The black sand beach below the verdant jungle clinging to the steep coastline is certainly in sharp contrast to the hot, black lava desolation we just drove through to get here.

On the way back, we decide to take the “high road” – the Kohala Mountain Road (#250) through to Waimea. As we climb the slopes of the Kohala mountains, it gets cooler, and the tropical vegetation gives way to scrub and grassland. The Kahua Ranch has some superb grazing land, which, it strikes me, has grassland growing all year round. Sheep, cattle and horses are all grazing on the ranch land.950827.jpg (56391 bytes) Ironwood Avenue is a portion of the highway where ironwood trees line both sides of the road.

The town of Waimea is a cattle town, situated midway between the old town of Hilo on the east coast, and Kona on the west coast. There was a swap meet being held in the fairgrounds as we pulled in, so we snapped up some of the bargains! The Hawaii Belt Road or Mamalahoa Highway (#190) offers some superb views of the Kona coast below. Traveling through the clouds on our way down to the tropical heat of the coast provides a dramatic contrast. Contrasts are part of the appeal of the Big Island – unlike any other Hawaiian island. 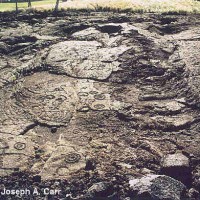 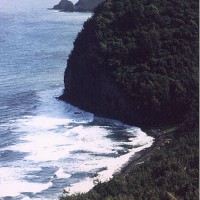 Spectacular view of the north coast from the Pololu Valley Lookout 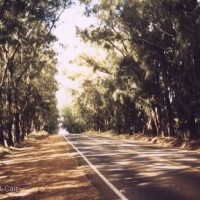 I drove this route in 2001, however the sights remain the same today. Another route to the north coast of Hawaii is the “high road” – the Mamalahoa Highway to Waimea. The view of the South Kohala Coast from Akahipu’u Lookout on Mamalahoa Hwy was clear all the way to Maui in the distance. The rangeland of The rangeland of the Parker Ranch looks pretty dry. Kohala Mountain in the background. (98885 bytes) the Parker Ranch looks pretty dry. The rangeland along the north coastline near Kukuihaele looks a whole lot better. The Parker Ranch livestock appear to be located here, although I’m told most of their cattle were shipped to the mainland because of the ongoing drought conditions.

The view of the north coastline from the Waipi’o Lookout is just spectacular. Waipi’o Bay, Waipi’o Valley and the coastline is awesome – just like the Napali coast on Kaua’i. The ‘Ainahou peninsula juts out from the coastline – there must be a story about that peninsula. The stream at the one lane bridge at Kukuihaele is very picturesque – it looks like it is cultivated. I browsed the nice gift shop at Kukuihaele and had a ham & cheese sandwich from the deli located in the same building. Recommended.

Contrast between pasture land and the coastline near Kapulena (64057 bytes) The contrast between the pasture land and the coastline near Kapulena is striking – bright yellow against the deep blue of the ocean. The main street of Honoka’a has some interesting shops. Check out the numerous Japanese general stores located along the main street. I bought a Mac nut bran muffin at the Mamane St. Bakery – yum! Recommended.

Tree-lined Malalhoa Hwy (76645 bytes)The tree-lined Malalhoa Hwy between Honoka’a & Waimea reminds me of our own highways in BC. I had originally intended to drive east along the Hawai’i Belt Road all the way to Hilo, but time has a way of slipping by. As I always say to travelers – leave something to see and do next time you return to a destination. 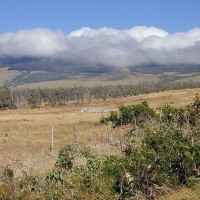 Range land of the Parker Ranch 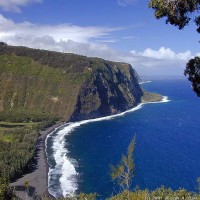 Waipi’o Valley from the lookout 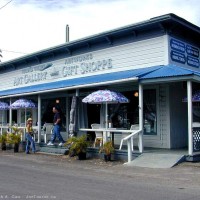 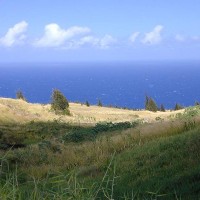 Contrast between the pasture land and the coastline near Kapulena 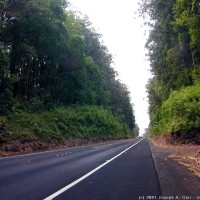 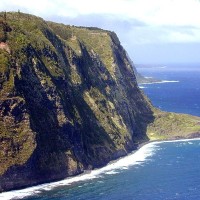 The north coastline from Waipi’o Lookout 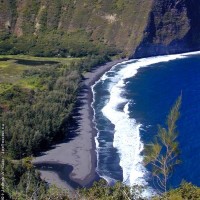 The north coastline from Waipi’o Lookout

Speaking of leaving something to see and do next time, in 2009 I drove to the North Coast from Hilo, which presented some of the same sights as described above, but also offered some fascinating new sights as well – most notably Akaka Falls.