Thompsons Africa‘s South African Surprise bus tour drives from Johannesburg to Cape Town down the Wild Coast and the Garden Coast, with diversions to Kruger National Park and other interesting sights along the way. This appealed to me because it offered a nice counterpoint to the Botswana safari I started my tour of Southern Africa with – going from Land Cruisers bouncing wildly in off-road adventures to an air-conditioned tour bus on paved highways; and from sleeping in tents at camps without electricity or running water to nice hotels and resorts with all the amenities. This South African tour was 15 days long. It left Johannesburg the day after I returned from Botswana. Travelling for a total of four weeks (instead of 12 days in Zambia & Botswana) before returning home made enduring those long flights to the opposite side of the world worthwhile. 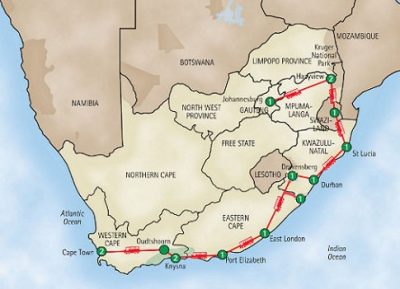 Over the next few days, our guide Craig Oliver gives us the following tidbits of information about his country of South Africa: