Paul picks me up at 8am for our pre-arranged tour to Cape Sounio to see the Temple of Poseidon. We drive along the Saronic Gulf coastal road through Glyfadha (close to Athens), Vouliagmeni (posh resorts), as well as Lagonisi and Anavyssos (beachfront towns).

The Temple of Poseidon site (€4 admission) is the southern most point of land for the isthmus where Athens is located, jutting out into the Aegean Sea. Even with the various stops for photos we made along the way, we arrive at 10am. The morning light is near perfect, so I get a nice dark blue sky to contrast with the temple’s marble columns. Needless to say, this site is dramatic. The temple is located at the top of the headland, which has steep cliffs to the sea hundreds of metres below. Spring flowers are in full bloom, and there is a fresh breeze blowing. I take advantage of the sparse crowds and photograph the temple and headlands from every angle. 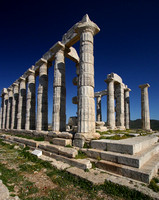 I opt to return to Athens along the same coast road we just took because the alternative is to drive back down the middle of Mesoyia. Along the way Paul is called by one of his drivers to tell him there are three protests in full swing in Athens. He said he had parked the bus and was between police tear gas and the protesters Molotov cocktails! We change our plans, and divert to Markopoulo and drive on the expressway by the new airport to see the new Olympic Stadium.

Paul drops me off at the Irini metro station, since he won’t be able to drive into central Athens while the protests are on. I get back to Omonia station downtown within 15 minutes, and walk the few blocks back to the apartment. No sign of any protests.

I withdraw €500 from a bank machine, so I can pay Paul €490 for the two airport transfers, the full day tour to Corinth and the Peloponnese sites, and the half day tour to Cape Sounio. I’m very happy with Paul’s services, and although a significant expense, it is much cheaper as compared to the bus tours our group took in Italy.

I have a nap before going out to dinner at 8pm. Ayah again for my last dinner in Athens: Roca salad and rabbit in lemon sauce with roast potatoes and rice. The rabbit is delicious, but has small bones. They serve me a little dessert gratis: a small square pudding with citrus peal, currents and dusted with cinnamon.

Except for the odd beggar, nobody is alone in Athens. Folks are socializing in cafés, on the street, or having energetic conversations on their cellphones while they walk in the city or take the metro. Speaking of which, virtually everyone has a cellphone here. I passed one guy today sitting in the same seat in a café outside my apartment three times – at about 1pm, again at 4pm, and finally at 8pm!