on the Big Island of Hawai’i

If you are driving from Hilo, allow an hour travel time to drive the 25 miles to Volcanoes National Park. It is a good highway, but heavy traffic and/or road maintenane can make it slow going at times. Proceeding south on Highway 11 from Hilo, you will pass Hilo airport, the turnoff to Keaau (Highway 130) and Volcano Village before arriving at the main entrance to Volcanoes National Park.

The best place to start your tour of Hawaii Volcanoes National Park is at the Visitor Center. There is a small admission charge at the gate to the park, which fully encloses the Kilauea Caldera and other volcanic areas right down to the coastal area. The park entrance fee is good for 7 days, so try go back later to see more of this interesting area if you have the time.

The Kilauea Caldera is the main feature of the park, and is quite spectacular when viewed from the Volcano House hotel balcony, which is perched right on the rim of the caldera! Kilauea consists of several craters inside the caldera, all of which were active until quite recently. The Halemaumau Crater can look quite tame, with only a few steam vents visible in the area, however it becomes very active on a regular basis. Another crater inside Kilauea is Kilauea Iki, or “little Kilauea”. This crater has a smooth glassy lava bottom. Crater Rim Drive will take you around the main caldera, assuming the road is not closed due to volcanic activity.

Plan your visit to Hawai’i Volcanoes National Park – find out about volcanic activity in the area, which roads and sights are open or closed, and plan what to do with your time. If you don’t plan ahead, you are setting yourself up for disappointment. Since this is an active volcanic area, you need to know what areas are closed so you can plan a successful day seeing the sights that are available to you.

Chain of Craters Road gets it’s name honestly. This area was the site of some terrific eruptions as late as 1974. Several craters along this road have a recent history of eruptions, and are short walks from the road. The line of fire phenomenon is quite common, as is the lava river, which formed many of the huge black lava flows.

Chain of Craters Road – please read the Wikipedia description to decide if you want to see this area or not.

Before we proceeded down Chain of Craters Road in 1995, we were warned by the Park Service that a tsunami warning had been issued for the south coastal area of the Big Island of Hawaii. We were allowed to proceed down to the steam plume which was visible from the end of the road, providing we turned our car around and parked on the road facing back to safety. This is the site of active lava flows, which in this case flow into the sea, causing a huge steam cloud of hydrochloric acid gas. Needless to say, we didn’t get too close!

Along the way back to Kilauea, we came upon a black sand beach along the coastal area. After walking on crunchy, slick, black, hot, fresh lava flows created only last year (see the foreground of the steam plume photo), it is easy to imagine the lava spatter that caused all of this new land to be formed so dramatically. Sometimes humans seem to tempt fate by building subdivisions in the path of the lava flows.

Although Kilauea is only 4,000 feet above sea level, it is very active. It’s bigger sister Mauna Loa is 13,679 feet above sea level, and is also active. The third volcano on the Big Island is Mauna Kea, which has research observatories located atop it’s peak, and is much less active than the other two volcanoes. 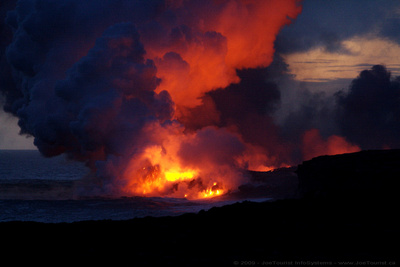 In 2009 I ventured outside of Volcanoes National Park to see some active lava flows at night. I left Hilo a bit after 4pm and drove Highway 130 as far as it goes, and then a bit further through the outpost community of Waikupanaha, which is built on the active lava flow in the eastern rift zone outside Volcanoes National Park. The civil defence folks were in charge of this area, offering traffic control and safety services. The trail to the viewing area on the coast was about half a mile west of the active flow. It was a half hour hike across fresh lava to the viewpoint, however it was worth the effort, since this is the first time I have observed hot flowing lava. I took photos with my digital SLR camera which was modified to see infrared better. I also took some video of the flows entering the sea. It was quite spectacular! 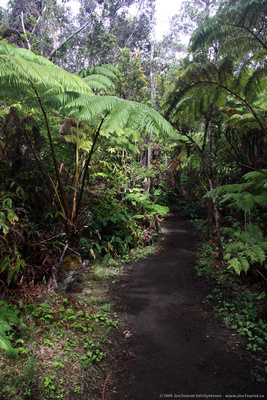 If you stop to see the Thurston Lava Tube like most tourists do, be sure to cross the road and explore the Crater Rim Trail. Spend ten minutes walking along the crater rim of Kilauea Iki – it is fascinating, and you will get some great shots of this smooth-floored crater (1958 was the last event – quite recent).

If you decide to spend two hours hiking along the bottom of this crater, please keep in mind, the total distance is about three miles, total elapsed time will be about two hours. This is a great hike, but take a bottle of water for each person, as well as some high energy food such as cereal/granola/chocolate bars. Start out from the parking lot no later than 3 hours before sunset. You don’t want to finish this hike in the dark.

Hike westward along the Crater Rim Trail, and then circle left (counterclockwise) down the crater wall to the start of the Kilauea Iki trail. You will hear an incredible number of birds singing as you walk through the tropical crater rim on the first leg of this hike.

The contrast between tropical forest and crater when looking toward Kilauea Caldera and Kilauea Iki is striking. The walk across the bottom of Kilauea Iki’s crater bottom is a real eye opener, since there is so much plant life on the bottom growing in the many fissures. You then get to climb the steep trail back up the crater wall to the Thurston parking lot. I guarantee you will be puffing by the time you reach the top of the crater!

If you have heart or breathing problems, or you have infants or pregnant women with you, avoid the volcanic fumes to be found at Sulpher Banks, Halemaumau Crater, and other areas where volcanic fumes are often present. Park wardens can advise you how to safely experience Kilauea volcano.

If you plan to hike in the park, you should realize lava fields are very hot and there is no shade. Bring lots of water, wear a hat, and wear sunscreen and sunglasses. Wear good hiking shoes, long pants and light long-sleeved shirts. Don’t hike in the dark, and stay on established trails. If you haven’t hiked in this park before, why not take one of the many guided hikes lead by the park naturalists? They are both interesting and fun.

When driving, remember you are not on a freeway! Drive slowly and watch for pedestrians and bicyclists. Watch for the Nene (Hawaiian Goose) – the state bird of Hawaii. More Nene are killed by cars than by any other means.

Lava is new land that is quite unstable. Don’t walk near edges or near cracks – they may break off without warning!