The Big Island of Hawai’i is the largest island in the group, and without a doubt I find it the most interesting to visit. 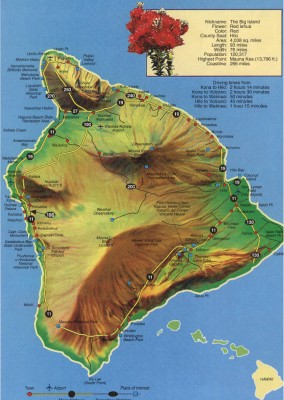 Map of the Big Island of Hawaii

Upon arrival at the Keahole Airport on the Kona Coast, a traveller might be forgiven for asking themselves “why did I come here?” For miles and miles around, all that can be seen is black lava flows, and precious little else. Pretty desolate, to say the least. My advice would be to hang in there. There is much to see and do on the Big Island of Hawaii. Lava and volcanoes are a big part of the island, but there is much diversity to experience!

The first time I visited the Big Island in 1995, we stayed on the Kona Coast just south of Kailua-Kona town. This area is a typical strip development for tourists. The Big Island has some superb beaches, however you must seek them out. Most of the coastal area is lava rock shoreline, which limits the usefulness for just “lying about”. Resorts typically have pools and large deck areas available for their guests who wish to swim or sun themselves.

The second time I visited the Big Island in 2001 I was traveling alone. I found many interesting bed and breakfast establishments situated throughout the Big Island. I decided to stay in a B&B in Captain Cook, on the South Kona Coast. This is a nice central location, and yet it’s well south of the Kailua-Kona “strip”.

The third time I visited the Big Island in 2009, I returned to the Captain Cook area and found another good B&B, and then drove around the south end of the island to stay in Hilo at Old Hawaiian Bed & Breakfast for a few more nights.

The fourth time I visited the Big Island was in 2014 on a cruise ship. Holland America’s m/s Statendam spent two days visiting the Big Island with two ports-of-call: Kailua-Kona and Hilo.