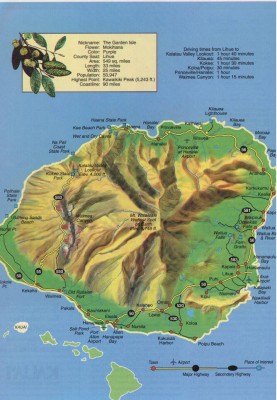 Kaua’i is dubbed “The Garden Isle”, which is a name that is well deserved. Kaua’i gets the most rainfall of any Hawaiian Island, however I was very lucky during my stays here. It only rained during the evening, and some very brief showers during the day. The main town of Lihu’e is very small town in appearance, and there is not much to see there. The rest of Kaua’i is spectacular in it’s beauty, and is well worth spending some time touring around.

Kaua’i is small, and the coastal road does not go all the way around the island. It is easy to drive anywhere on the island in an hour or so. Traffic around the main town of Lihu’e can get congested, but compared to mainland traffic, no big deal!

So much to see, and so little time on this gem of an island…

We arrived in Nawiliwili Harbour on Kaua’i in the evening of the 29th and overnight at the dock. The following day, my friends and I rent a car and drive around Kaua’i to see the sights before the ship sails in the late afternoon.

In 2001 I traveled to Kaua’i by myself and stayed 7 days in a privately run vacation rental (Ginger Hale) operated by Kakalina’s Bed and Breakfast. Ginger Hale is no longer available, however Kakalina’s B&B continues to be very well rated. I rented a car and spent the week exploring Kaua’i. Although the information is a bit dated, the travelogues from this trip represent the best coverage I have of the beautiful island of Kaua’i.