I wake up at about 5:30AM this morning to the ship rolling quite a bit. When I peek out my cabin window, the seas are high and the skies are grey. I leave the curtains open as I snooze for another hour before getting up. I go a deck up to the Promenade Deck with my camera to capture the scene. Moorea is barely visible through the mist – not a good sign!

The captain makes an announcement at 7AM that the seas are too rough and the winds too strong to go through the channel into Cook’s Bay, where we were to anchor. He indicates he will continue to cruise along the coast of Moorea for a while longer, with hopes the weather will break for us, so he can decide to enter the bay and give us our day in Moorea.

At 7:45AM the captain announces today’s stop in Moorea is scrubbed since the winds are too strong for us to safely enter the channel through the reef. We are headed for scenic cruising around the southern shores of Moorea and Tahiti (Tahiti Iti), which isn’t a bad replacement for what would otherwise be a wet day ashore. Despite the bad news, we have been very lucky with the weather on this cruise, since this time of year is when French Polynesia typically gets wet weather and storms.

I have breakfast in the Rotterdam Dining Room, since there is no longer anywhere I have to be this morning. After breakfast I retreat to the Crow’s Nest Lounge to take full advantage of the view from the highest deck on the ship.

Once the entertainment staff revises the schedule to include normal sea day activities for the passengers, they issue an updated list for us to peruse. I decide to see the documentary Paniolo – The Hawaiian Cowboy with Kainoa offering an introduction to the film and hosting a Q&A after. I’m unsure if the video I have included here is the same as the one shown aboard the ship, but it covers the same material and is 14 minutes long.

The Last of the Hawaiian Cowboys from Julia Cumes on Vimeo.

This afternoon I decide to walk the Promenade Deck, but have to retreat inside after encountering winds so strong, I could barely keep my footing. When I return to my cabin and check the information channel, the winds are gusting to 49 knots, which we are taking on the nose on our heading of 012 (North). The ship’s speed is below 10 knots. Remarkably, the ship isn’t pitching or rolling much, so the ride is comfortable despite the high winds. The outside decks are closed later on for safety reasons. It looks like the North Atlantic outside, except the temperature is 29°C. I guess our luck with the weather just ran out! So much for the scenic cruising, since all we can see outside is grey mist and huge waves. 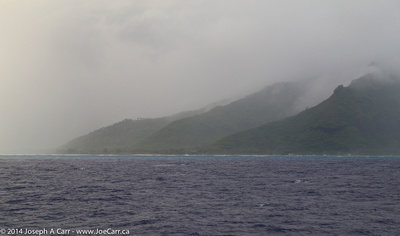 Northern tip of Moorea in the mist 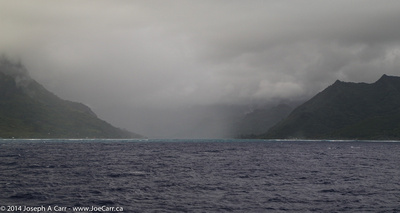 Entrance to Oponohu Bay in the mist 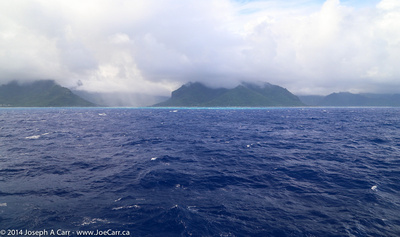 Cook’s Bay and Opunohu Bay in the mist