I get up early to take a tour to Taroya Park, which involves walking through Colombia’s jungle. The ship arrives on time and the tour bus takes the highway out of town on the way to the park, but soon comes to a stop because there is a protest blocking the road. Police are there, and apparently the protesters are upset over not having power in their neighbourhood, despite having the wiring in place. Eventually our guide comes back with the news we can’t proceed, since this is the only road to the park. Our guide gives us three options: return to the ship and get a full refund, be dropped off for the day at the resort hotel, or take a city tour. Both the city tour and the resort option include a folkloric dance at the Irotama Beach Resort.

Like most on the bus I choose the city tour, since in addition to the folkloric dance, we will see the main cathedral in town as well as the Gold Museum. Our first stop is the Irotama Beach Resort, which is 20 minutes out of town near a resort area. They have a beautiful beach, and offer us refreshments before the show starts. I choose a Colombian beer, which tastes very nice as I sip it under the palm trees. The folkloric dancers look quite similar to the ones I previously saw in Costa Rica and Martinique, but the young dancers do a great job. Apparently all Colombian children learn three folkloric dances when they are in school. See banner image above.

Our next stop is the main cathedral back in the centre of the city. Santa Marta is very much a third world city with dirty ditches lining the streets, narrow sidewalks, fruit vendors and old buildings with rickety balconies overhanging the streets below. As we enter the cathedral, our guide talks about Simon Bolivar, who liberated several Central and South American countries in his time, including Colombia. He is very much revered for his selfless sacrifice, since he died in this city from tuberculosis when he was in his early forties. The cathedral is impressive, with many alters decorated beautifully, however I’m most impressed with the large plaza surrounding the cathedral. It is a lovely civic space with no cars, shade trees, and some nice shops on the perimeter.

Our final stop of the day is the botanical gardens. We see lots of native flora and fauna, include the obligatory iguanas in the trees, butterflies, and there are several monuments to Simon Bolivar. Our guide shows us an old sugar cane plantation home where Simon Bolivar died, including the actual bedroom with original furniture. I learned about Simon Bolivar in grade school, but didn’t appreciate how much the people in Central and South American countries revere him. He was someone who bucked the system and believed in people power.

Our guide has some interesting things to say about Columbia and the reputation the country has with the drug trade. He feels the major cities are safe for citizens to go about their business and for tourists, and illustrates the point by asking us a question. What are the two major industries of Medellin? The obvious answer is Drugs, but the real answer is: Shipping tropical flowers to the United States, and being a centre of excellence for plastic surgery! He tells an interesting story on the second point. Apparently the two largest markets for plastic surgery in Medellin are women from the United States and Brazil. Another major market are young Colombian women who want breast implants. Apparently they often get their parents to pay for the surgery!

After the ship departs port and we have a wonderful dinner in the main dining room, I go to see the entertainment in the main show lounge. Julian Gargiulo is a classically trained pianist and does a great job playing the grand piano centre stage. He showcases some of his own compositions along with Chopin, and finishes with a classic Beethoven piece. 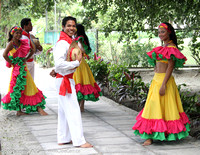 We arrive in port on time this morning at 8am and are serenaded by a local dance troupe performing Polynesian dances on the dock. Noumea is a large, and well developed city, however since it is Sunday, most stores are closed. “Casino”, the supermarket across the street from where we are docked is open until noon, which according to my friends who lived in France is “very French”, since Sunday afternoon is reserved for time with family. The prices in the supermarket are as I expected: about three times higher than anywhere else for foreign imported goods, and reasonable prices for local goods and those items imported from France. New Caledonia is a French colony.

I quickly decide during our little excursion to the market this morning that it is too hot to bother with any tours. I return to the ship and have a swim in the Sea View pool. There is lemonade being served poolside, so I soon cool down. I go out on the Promenade deck and sit in a lounge chair in the shade and work on my journal and photos – watching the world go by. There are huge numbers of sailboats moored in the harbour…almost to the point of it being crowded. People in power boats scoot alongside our ship, waving hello before taking off again

A local dance troupe Temonoroa Dance Group put on a terrific show of Polynesian dancing in the show lounge aboard ship this evening. They get some audience participation going, with both the men and women in the audience appearing on stage. The Volendam departs right after the show, once the troupe goes ashore with all their costumes and gear. She creeps out of the harbour dead slow past all the sailboats that are moored for the night.

Please note, the photos below are from two cruises, this one in 2010 aboard the Volendam, and a followup Solar Eclipse cruise in 2012 aboard the Paul Gauguin.