We drive back into Germany from our Austrian hotel this morning to see two famous Bavarian castles both near Füssen in Bavaria.

King Ludwig II’s Neuschwahstein Castle is probably the most famous, since Disney’s Fantasyland castles are modelled after this spectacular castle located on a hillside overlooking a beautiful green valley and lake.

The crowds here are very bad, especially on Mary’s Bridge, which is above the castle, giving a picture postcard view of the castle with the valley behind. This castle was built in the 1800s, and poor Ludwig only got to enjoy his castle for a few months before he died. When Ludwig was king, his ministers plotted to depose him in 1866 because he was homosexual. He committed suicide in the nearby lake along with his doctor (who had just declared him mad – later disproved).

Heohen-Schwangau Castle is a beautiful castle located beside The Alpsee, a glacial lake. This is where Ludwig’s parents lived, and is where he was raised. His father, the king loved the night sky, and had his bedroom equipped with stars in the ceiling and a Moon, which could have the phase changed as required.

Jennifer and Sylvain have a picnic lunch all ready for us when we return to the parking lot, so we spread out near the Alpsee lake and enjoy ourselves. After clearing crowded Neuschwahstein Castle, we take a group photo in the nearby valley, posing with the castle behind us on the hill while sipping some schnapps.

Next stop is a luge – individual carts run through a metal tube down the hill, slalom-style. Everyone in the group tries it – some go faster, and others take is slowly. The luge is one of the reasons I finally decided to book this Rick Steves tour. I reasoned that any tour operator who includes a ride on a luge as part of the stated itinerary must have something going for them! 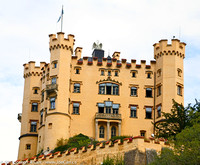