We arrive in Honolulu harbour on time this morning. The early morning approach offers some superb views of Diamond Head and the south shore of Waikiki and Honolulu before we slip into our dock at Pier 2.

I am on an excursion today, our first of two days in Honolulu. The Explore and Taste Oahu’s North Shore tour is a 6.5 hour all day affair run by Roberts Hawaii, which visits the tranquil Byodu Temple after we travel over the H3 freeway through the Koolau Mountains to Kaneohe. The temple is quite beautiful and tranquil despite the groups from the numerous tour buses wandering the grounds.

We then stop at Chinaman’s Hat Rock, which is a rock sticking out of Kaneohe Bay. We drive by the Crouching Lion restaurant (now closed), which my friends and I stopped at for lunch the last time I visited Oahu. Our stop at Malaekahana State Recreation Area offers a great view of the ocean and a spectacular beach, not often visited by tourists or locals. (It looks like Malaekahana is now operating as a campground and retreat.) As we pass the Polynesian Cultural Center, our guide explains how the students study at the Brigham Young University and the adjacent Latter Day Saints temple in Laie, and also work at the Polynesian Cultural Center to pay for their education.

Our destination for lunch is just up the road: Fumis Kahuku Shrimp (Yelp reviews), where we have a pre-ordered lunch of shrimp, cod, or chicken. Most people order the shrimp, which is a large portion that comes in a Styrofoam plate along with some salad and rice and a soft drink. I find the Lemon Pepper Shrimp to be very tasty. There is a washbasin to get the grease off after the meal is finished. Shave Ice can be purchased for dessert, for those so inclined. This is very casual dining, but the food is very good! The James Campbell Wildlife Refuge is visible out by the coastline from here, and the shrimp ponds where the shrimp are raised are right beside this roadside stop.

We carry on to see Sunset Beach for a quick 10-minute stop, then pass by Tunnel Beach, both of which are world-famous for surfing (see banner image above). There are lots of surfers riding the waves.

Waimea Bay Beach Park is the next stop to see the turtles in the bay feeding on the algae. We spot one turtle. We then turn away from the coastline, driving through the little town of Haeliwa, and make our final stop at the Dole Plantation. This is the typical tourist trap if ever I saw one, but thankfully it is only a 20-minute stop before we carry on back to Honolulu over the H2 and H1 freeways, passing Pearl Harbor along the way.

The ship stays at the dock overnight, so we sleep aboard.

I don’t have any excursions booked for today, so I get up and have a leisurely breakfast in the Rotterdam Dining Room. I go ashore from Pier 2, walking a few blocks up South Street as far as the Mission Houses, the Kawaiaha’o Church, and then cross South King Street to see the State Capital and Iolani Palace.

I return to the Mission Houses for their tour of the inside, paying the $10 admission. It was very interesting hearing how the missionaries from Boston sailed around Cape Horn, to live and work in Hawaii. They supported themselves by printing and selling (or bartering) books and documents. They gave the Hawaiians their written language, introduced them to western music melody, and of course as missionaries, converted many of them to Christianity. I don’t have time to go into the Iolani Palace before it closes, so I return to the ship to freshen up and have some lunch.

I spend the afternoon aboard ship, swimming in the Ocean View Pool and generally relaxing. I am also taking advantage of the roaming package I purchased from Rogers, my cellular provider in Canada. The roaming package includes 15 minutes for voice calls, and also includes 200Mb of data. Since I have high speed LTE connectivity here, I can ignore the ship’s slow and expensive satellite Internet connection, and get a few things done online. I also call Harper’s Car Rentals to change my arrangements on the Big Island of Hawaii to a one-day rental with no drop off in Kona, which they happily do for me.

Collection of photos of this visit and my previous visit to the Honolulu area in 2010.

Although this is my fourth time visiting Costa Rica, this is my first time in Limon. I came closest to Limon on my first trip to Costa Rica when I took a boat up to Tortuguero National Park to stay in the jungle for a couple of days.

I signed up to take a shore excursion today, but I’m glad it doesn’t leave until 9AM because I am having a tough time getting motivated this morning. After having some breakfast and my cappuccino, I am finally ready to get out there. When our group leaves the ship to go on our excursion, we discover we will be transported in a big, honkin’ tandem wheeled bus that is so high off the ground, we have to climb a set of stairs that folds down out of the back of the bus. It is air-conditioned and the seats are quite comfortable. There are big windows, and I’m happy the bus is only about half full, so there is lots of room to spread out. Another bonus is the weather – no rain, but overcast so it’s not too hot. The locals tell us the last few days have seen pouring rain, so we are lucky, since the good weather holds for the whole day.

Eric is our guide and Jose is our driver. They are business partners, and built this vehicle from scratch on a GMC truck chassis. We head south along the coast and then turn inland, traveling along the Banano River past the little community of Bomba, which is where the pumping stations are located for Limon’s municipal water supply. We driver further along the Banano River and then stop for a walkabout. Eric points out all sorts of flora and fauna, include the Golden Orb spider, a Balsa tree, and a red Poison Dart frog. 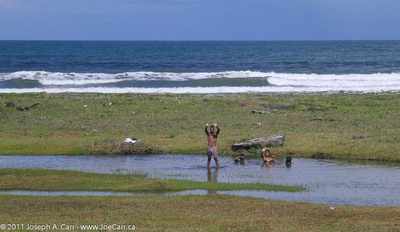 We carry on along the river and then turn off the road into a banana plantation, where we stop to have a snack and listen to Eric as he explains all about the banana business. Eric mixes a drink called a “Missile”, which is a local liquor called Guaro, a squeeze of local (sweet) lemon, and topped up with Fresca. I prefer to have a local Imperial beer, but those who try the Missile say it is very smooth and refreshing. The good weather is still holding as we return to the ship by 1:30PM. As we travel along the coast there are many Tico families swimming and playing along the shoreline since it is Sunday. Of course they all stop to wave when they see our bus – a bit of a contrast from my experience in Colombia, where the locals either ignored the tour bus or just stared at us.

It is a welcome relief to get back on board the ship, which is really starting to feel like a home away from home. We depart on time, with the First Officer piloting us this afternoon. We now head for the port of Colon to transit the Panama Canal tomorrow morning.

It is a short drive from Lihu’e or Kapa’a to the Po’ipu Beach area, which is on the south shore of Kaua’i. Along the way, drive down the mile of Eucalyptus trees, growing tunnel-like on both sides of the road. Old Koloa town makes for an interesting stop, with lots of shops to browse through. It’s just like stepping back 50 years in time to an old sugar mill town. I bought some Kaua’i coffee here, but red dirt t-shirts are also very popular items. Coffee growing on Kaua’i is a relatively new venture, however the quality is starting to rival the more well-known Kona coffee grown on the Big Island. On to Po’ipu Beach, where there are many condos and luxury resorts with spectacular ocean views and golf courses, and then on to the blowhole at Spouting Horn Park.

The return trip took us past an abandoned sugar mill, near Koloa. Notice the famous red dirt, which is so fertile for growing sugar cane. The main sugar mill in Lihu’e was closed in 2000, leaving only one sugar mill running on Kaua’i near Port Allen. The sugar industry on Hawai’i is slowly being put out of business. They will have to find another agricultural crop to grow, or find some other use for this very fertile land.

One restaurant on Kaua’i I must mention is Gaylord’s Restaurant, located in the main building of Kilohana Plantation Estates (an old sugar plantation). There are some very nice shops in this same building, and they offer some quality merchandise, should you be so inclined. The restaurant service is impeccable, and the food is superb. Reservations accepted. Highly recommended!

We dock in Nawiliwili this afternoon at 5:20pm (Sept 29th), and don’t leave port until the following afternoon. The Rotterdam is also docked as we arrive. She departs about an hour later – a lovely sight. As our gangway is put in place, complete with red carpet, a rain shower starts up – “welcome to Kauai”. We all stay aboard the ship this evening.

Headlands of Kaua’i as the Volendam departs

The following day, we decide to drive up the eastern and northern coasts of Kauai to a bit past the Hanalei Valley. We stop for a swim near Anini Beach and to see the Kilauea Lighthouse, and are back into town by 3pm and back onboard the ship by 3:30pm…well ahead of the 4:30pm All Aboard deadline. My friends and I have visited Kauai before, so this visit brings back good memories for all of us, and was a most enjoyable day.