We arrive in the small town of Bacharach located on the Rhine River after driving the whole day from The Netherlands. We are staying in Hotel Kranenturm, a 700 year old structure which was one of the towers along the wall around the town. It was part of the city’s original rampart wall, and is just a few metres from the train tracks. Kurt and Fatima run the place. Fatima decorated the hotel, and Kurt is the chef.

I draw the room at the top of the tower (Prince’s Room #18), which means I have the most stairs to climb, but end up with one of the funkiest rooms with the best view of the river and the town and hills. Our group have drinks on the patio while the trains scream past us, and we also have dinner together in the hotel dining room.

After breakfast in the hotel, we go on a walking tour of Bacharach with Herr Jung, an 83-year-old ex-schoolmaster with a great sense of humour. He takes us through the dark history of WWII from a German boy’s perspective (he was born in 1931). He was quite emotional at times, and everyone was very receptive to his message. He also led us on a walking tour of the town, highlighting the wine growing (which the region is famous for), the historic wall around the town, and interesting anecdotes about his personal friends and acquaintances.

After our walking tour, Sylvain drives us to St. Goar, a nearby town along the river where we do a walking tour of the Rheinfels Castle. This huge, historic castle was originally built in 1245, and withstood multiple sieges. The French invaders finally took over the castle without a fight and promptly destroyed most of it in 1797 during the French Revolution. Although the castle is considered to be in ruins, it is still very impressive as it sits on a hillside overlooking the Rhine River. A hotel is part of the castle.

Before we take a KD Rhine boat from St. Goar down the river to Bacharach, Jennifer leads us into playing “the name game” in the town square. We go around the group round-robin style, adding our names to the list of names, which everyone then has to recite (as a group). Of course, the list keeps getting longer, but the repetition helps us all remember each other’s names. The people in the square not in our group are amused by our antics!

The cruise down the river is great, since it gives us all time to rest our weary feet, and see the Rhine Valley and all the little towns, vineyards and numerous castles from a fresh perspective. We see: Loreley Rock (remember the old song “Sweet Loreley”?), Gutenfels and Schonburg castles, Liebfrauenkirche church, Burg Pfalzgrafenstein (a castle in the middle of the Rhine River), and the Oberwesel tower. 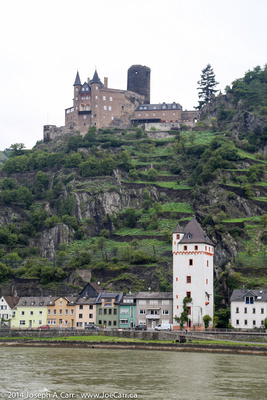 Katz Castle above St. Goarshausen on the Rhine River 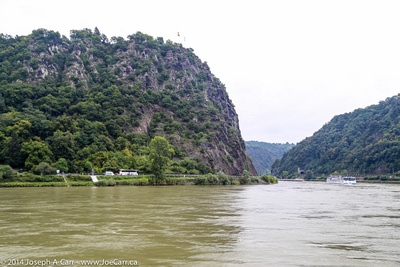 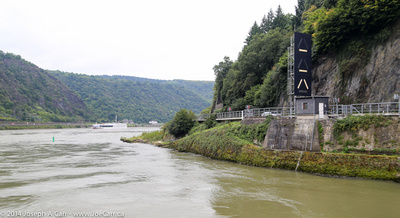 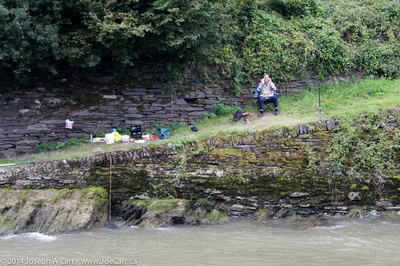 Fisherman on the banks of the Rhine River 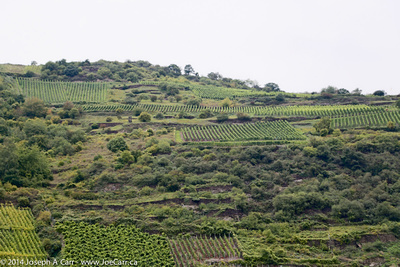 Vineyards on the hillsides 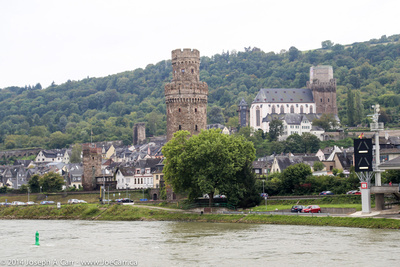 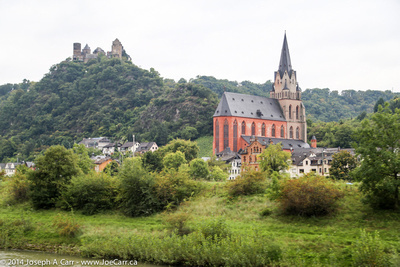 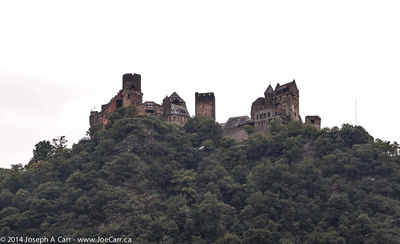 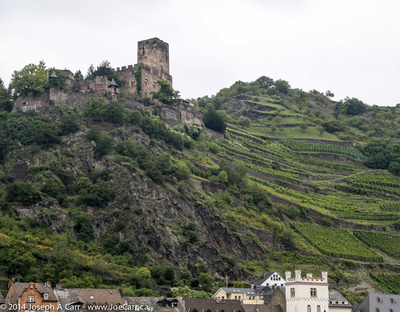 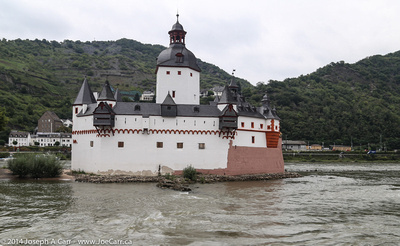 Burg Pfalzgrafenstein, a castle in the middle of the Rhine River 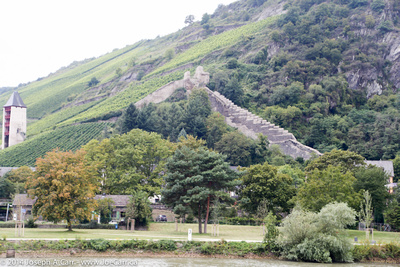 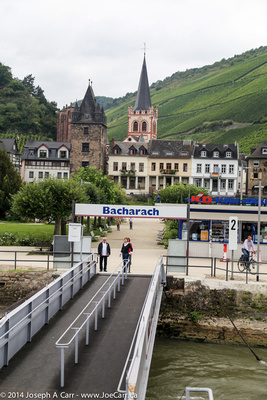 We arrive back in Bacharach late in the late afternoon. I go out with some of the group to a little restaurant on the main street only a block from our hotel and have a nice Jagerschnitzel, some Rhineland white wine, and a cappuccino to finish. Germans seem to serve cappuccino with a dollop of crème on top, so I have to ask for “plain, no crème”. Our all-American group is a lot of fun to be with, and this evening is no exception!

After breakfast in our hotel in Bacharach, we schlep our bags across the street to where the bus is parked, and we are off down the highway to Bavaria.

The advice from Rick Steves to pack light is a valuable lesson to be learned by travellers taking his tours, since there is no porterage and the hotels often have no elevators! Rick Steves tours do not issue name tags…you are expected to make an effort to remember everyone’s name.