As we pull into Semarang harbour around 10AM, I take video of a series of marching bands on the pier to greet us…shades of the Fiji Police Band in Suva – Oct 11, 2010 aboard Volendam! Half an hour later, I’m off the ship and onto the bus for my all-day excursion to Borobudur Buddhist temple. As the passengers walk by the bands as they get ready to leave, everyone makes a point of thanking them. The band members all seem genuinely thrilled to be there.

We are a huge convoy of buses all going to the same place. We have a police escort as we travel along the freeways out of the city. The police escorts become more valuable once we start traveling on secondary roads and through small towns on our way to the centre of the island of Java and the Borobudur temple.

Our driver is a maniac who thinks he is driving a racing car as he follows the second police escort. He has to stop when a cargo door opens and a woman’s walker falls out while we are underway. For his next stunt, he crashes the bus door into a truck when it is stopped in front of us. The police escort, the drivers involved and the tour guide all get out and quickly decide to carry on, since the bus is drivable and there are no injuries!

We stop for a coffee break at Eva Café House at noon, and arrive at the temple grounds around 1:30PM. Since it is so late, we immediately go for lunch under a huge catering tent setup for us right on the grounds. It is a very tasty hot buffet, complete with a choice of non-alcoholic beverages and fruit for dessert (which I skip).

Some young women perform traditional Javanese dance for us as we regroup to start our walking tour of the temple. A few members of the group want to go on their own, but most of us are lead by our guide through the various levels of the temple. He has been leading tours here for 27 years, so he has a lot of knowledge to share, which I found very informative.

Borobudur is the largest single monument in the Southern Hemisphere, and is unique among Buddhist temples, since it was built without the use of modern engineering and technology. The Buddhist kings of the Sailendra Dynasty built it, possibly to enhance the image of Buddhism when Hinduism was growing in strength across the Indonesian archipelago. According to historical accounts, it would appear that Borobudur may have been deserted soon after its creation, when the Sailenra Dynasty was overthrown by the Hindu Majapahit Empire in AD 850.

Borobudur was covered by jungle for more than 1,000 years until its rediscovery in 1814 by Sir Stamford Raffles. Over the next century, Borobudur was cleared and the process of restoring the two million pieces of andesite stone began. Borobudur has arguably the finest examples of Buddhist reliefs in the world, with each of the ten terraces symbolizing the path to Nirvana. At the top is the Great Stupa, which towers above the other 72 bell-shaped stupas and hundreds of statues of Buddha.

Considering our bad driver, I am not looking forward to the return trip in our bus. Our guide assures all of us that he has talked to the driver, and indeed our return trip is at a slower pace, making me much happier! On the way back to Semarang, all the buses stop at a Javanese handicrafts centre, where local people supposedly produce various handicrafts such as silver jewelry, wood crafts and Wayang shadow puppets. I don’t get off the bus, since it is crazy out there, with vendors chasing after tourists. Their wares all look the same as we encountered earlier at the temple and on the pier in Semarang. 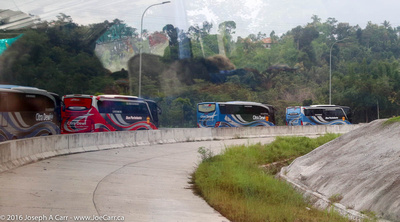 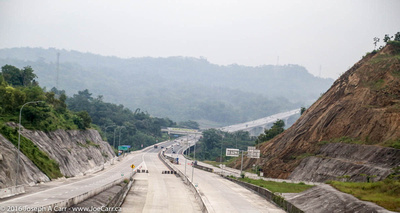 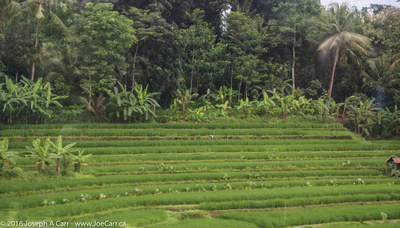 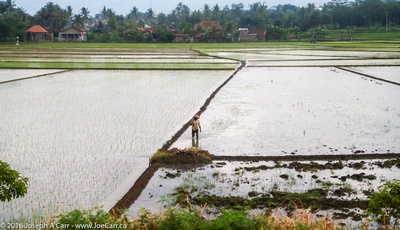 A farmer in a flooded rice fields 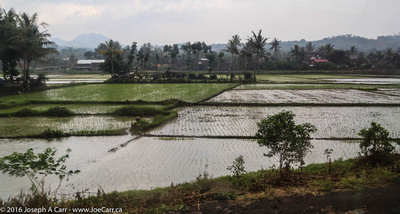 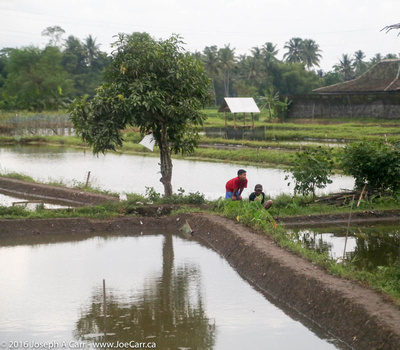 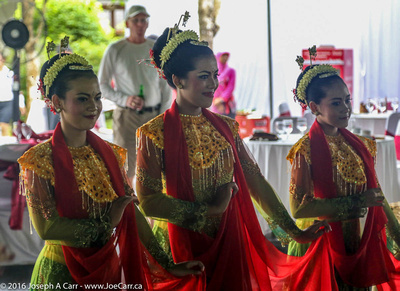 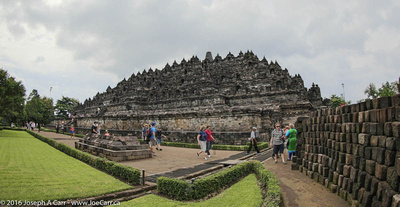 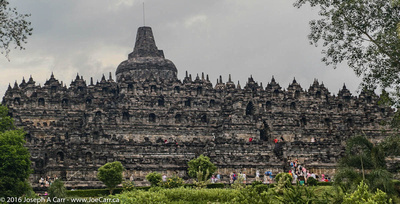 The East side of the temple 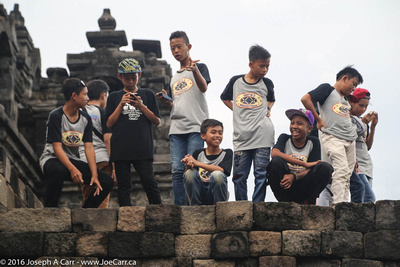 Indonesian boys on a field trip to the temple 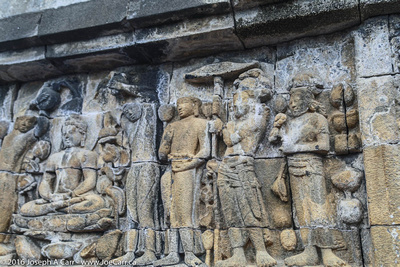 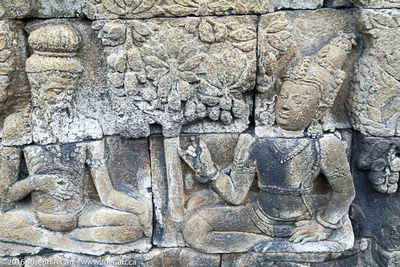 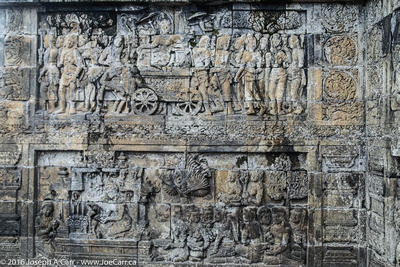 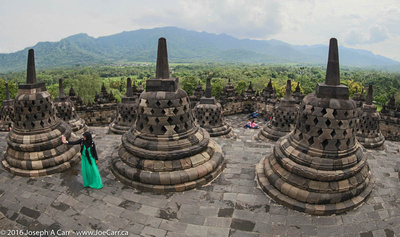 Hundreds of Buddha statues looking back to the temple 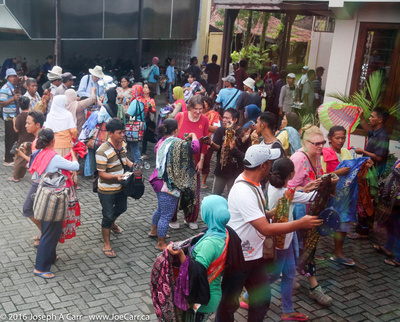 Vendors selling their wares to the tourists