Today is a full day tour with Paul, since getting to these sites without a car is difficult. Paul picks me up at 8am and we head out of Athens.

First stop is the north end of the Corinth Canal between the Aegean Sea and the Gulf of Corinth. It is obviously a very strategic waterway, since it eliminates sailing around the very large Peloponnese peninsula. Nero started the canal in 66 A.D., and used slaves and prisoners to dig 3.3km of the 6.3km total distance before having to abandon the project when he was arrested in Rome. The canal project wasn’t restarted again until 1882, and completed in 1893, paid for by the Greek government but built by private contractors. Sinking bridges at either end accommodate local traffic, however the expressway and other major roads go over top.

Next is Ancient Corinth (€6 admission). There are lots of interesting ruins here and a decent museum. The Temple of Apollo’s pillars dominate the Agora site, but the Lechaion Road, Fountain of Peirene and basilica offer a glimpse into daily Roman life here

Acrocorinth is visible from this site, located 565m above the ancient city. Paul drives up the mountain to the first gate, and then I climb the steep and rocky roads through the three gates built by various occupiers of this strategic fortress. I can’t face the 4 km climb to the top where the Acropolis is located.

Next stop is Mycenae and the Treasure of Atreus (€8 admission). Perhaps this is the most interesting site I see today, although it is less dramatic visually. Mycenae (and other ancient sites in the area) were inhabited by advanced civilizations hundreds of years before Christ (BC), proving that the tales told by Homer were based on fact. Mycenae is located on a low hill, and the Treasure of Atreus is located in a beehive shaped structure nearby. Actually, the treasures are now located in Athens at the National Archaeological Museum. The gold masks are a must see when you visit the Museum.

There are 900 steps to climb up to the Palamidhi Fortress from the pretty coastal town of Nafplio, however I opt to drive up (€6 admission). Palamidhi Fortress overlooks the town below, and the Bourtzi Fortress on Ayiou Theodhorou islet in Argos Bay. This is perhaps the most impressive fortress I’ve ever visited. It is perched on a steep hill, and the views are breathtaking. Like Acrocorinth, strenuous climbing is involved in exploring the site!

Ancient Epidaurus, Theatre – (€6 admisson) – This ancient outdoor theatre is still used today to stage performances. It is not as large or as well decorated as the theatres we saw in Libya at Leptis Magna and Sabrata, however it is an impressive theatre nonetheless. It dates to the 3rd and 4th centuries BC, and is part of a larger complex of buildings, including a sanitarium.

It has been a long day, but very productive and rewarding, since I experienced so many ancient sites, thanks to Paul’s intimate knowledge. I go to the Ayah restaurant again this evening for dinner, and have chicken and rice with Rocket salad – excellent!

Greek restaurants will dress most salads with oil and vinegar before serving unless you catch them first. As well, olive oil is poured on almost all main courses. 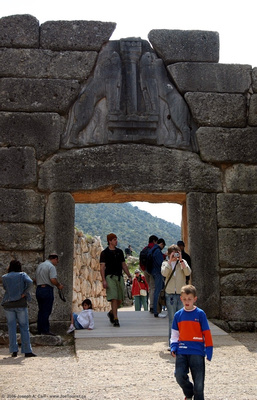 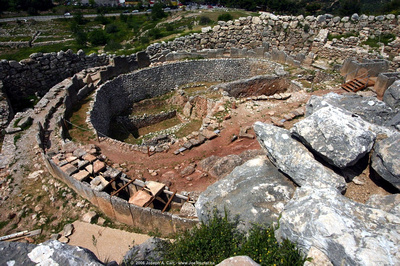 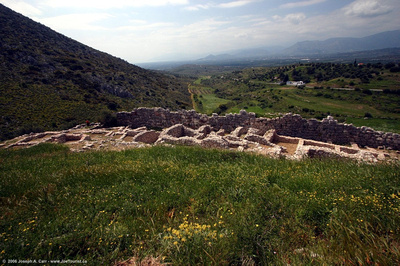 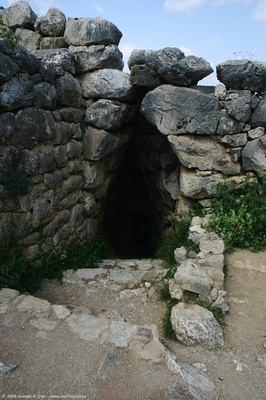 Tunnel to the underground cistern 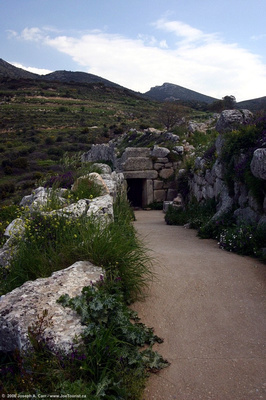 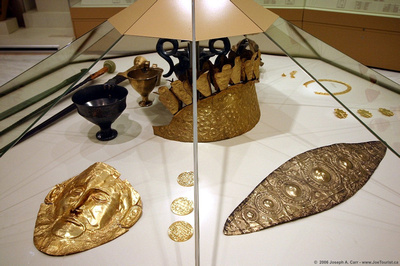 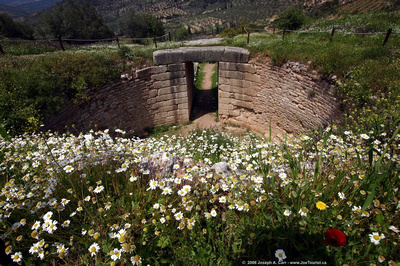 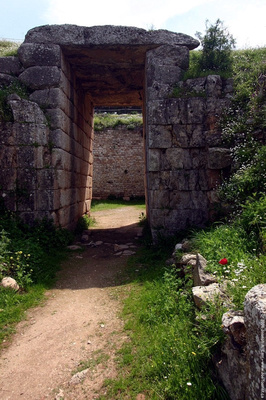 Entranceway to the Treasury of Atreus 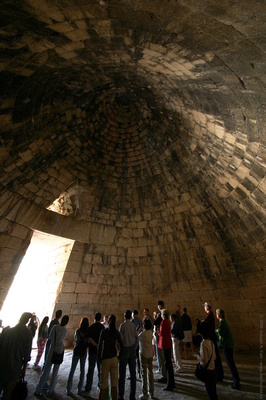 Beehive dome of the Treasury of Atreus 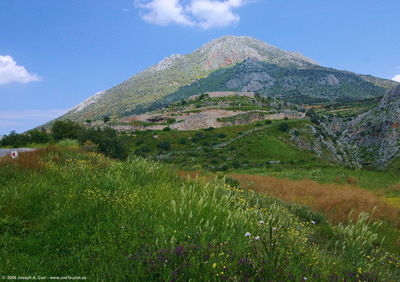 View of Mycenae from the Treasury of Atreus

Palamidhi Castle on the hill behind Nafplio 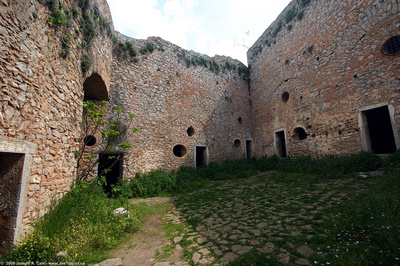 Inside the Palamidhi Castle walls 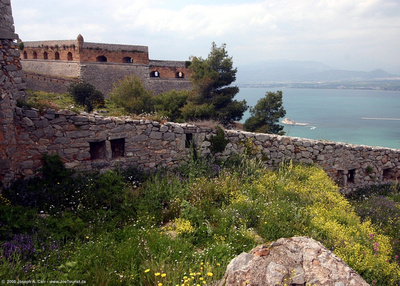 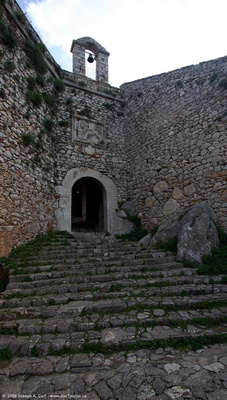 Huge steps leading to a gate and bell tower 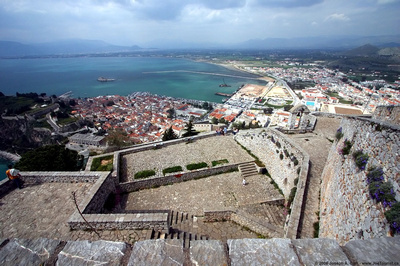 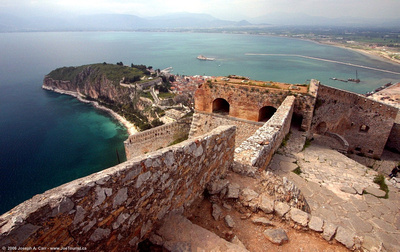 Huge walls and gun enplacements with the bay behind 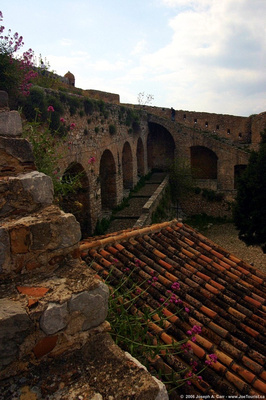 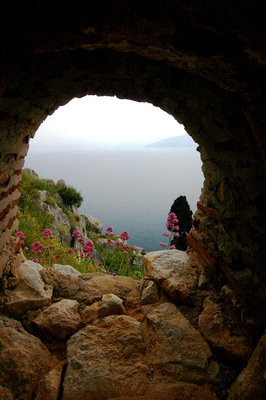 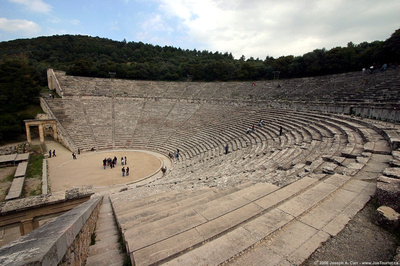 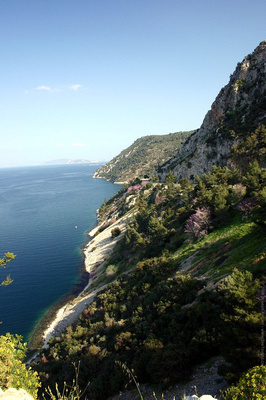 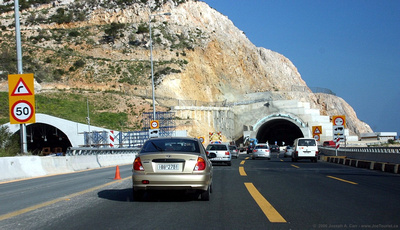