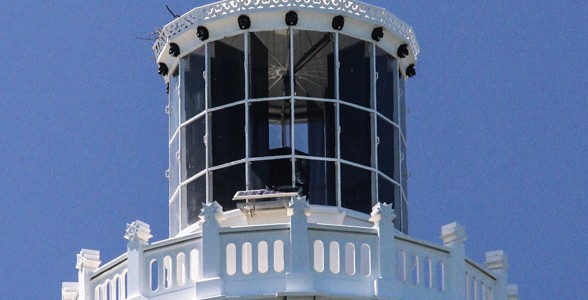 I depart on an all-day tour to Amédée Lighthouse, which is located on an island by the same name offshore from Noumea. This was not the tour I wanted, but it was the only one available which offered some snorkelling, after I boarded the ship a few days ago. We are taken to the boat basin, where we are joined by passengers from the P&O Pacific Jewel. Needless to say, there are lots of people on this large excursion boat, the Mary-D. The passengers from the P&O ship are mainly Australians, and many are families with young children. This is not my ideal tour, since it is quite noisy!

Despite that, the tour was well done. The lighthouse on the island is made of metal, and was shipped prefabricated from France in 1862. We had a superb lunch with wine and punch included, and with entertainment from a singing and dancing troupe. I enjoyed the lovely (alcoholic) fruit punch, along with the BBQ pork and seafood, and lots of salads and pasta dishes.

The only real disappointment is the snorkelling in the lagoon on one side of the island. I snorkel after lunch and find the reef is totally dead, although there are a few fish swimming around, and the Striped Sea Snake (poisonous) also makes an appearance! They also offer glass-bottomed boat rides and rides out to the edge of the reef, but I don’t bother with those excursions. After snorkelling, I prefer to just sit under a shade tree.

I learn from the Pacific Jewel passengers that on eclipse day their ship missed being on position on the Line of Totality. Apparently about 600 passengers had booked their cruise predicated on that happening, although there was also a large group of passengers who didn’t care one way or the other. That would be totally devastating for those who expected to observe Totality, but didn’t get the chance. Apparently the ship left port a bit late, and encountered strong headwinds, and couldn’t get to the position in time.