I get up at 6:30AM to prepare for the solar eclipse this morning. Of course when I get up on deck, there are lots of people already setup, but the ship is big and has lots of open deck space. I find a nice spot near the stern on the Sport Deck 9 and drag a lounge chair to sit on and to park my gear on as I setup next to the rail. Totality doesn’t happen until 8:35AM, so I have over an hour to wait until things start to happen. The ship is slowly cruising at 3-5 knots perpendicular to the eclipse centreline off the coast of Sulawesi in the Makasar Strait. Conditions are excellent, with calm seas, light winds, and although a bit cloudy, there are huge gaps between the clouds.

Due to the track of the ship, everyone is setup on the starboard side facing east. I setup my tripod, tape my Kestrel portable weather station to a nearby bollard, and decide to just aim my video camera out to sea in the direction of the Sun. I mount my camera on the tripod with the solar filter in place, and adjust it so I can remain seated while operating the camera. I’m soon taking photos of the partial phases of the eclipse as the Moon slides in front of the Sun after First Contact.

Totality soon arrives at 8:34:39AM at Second Contact. Bailey’s Beads are visible all red and sparkly on the left side of the solar disk at the start. By midpoint in Totality, they are also visible on the other side of the solar disk…a beautiful display! Of course, plasma streamers are flowing away from the Sun, with a bit of a gap in the flow at the 4 o’clock position. Both Venus and Mercury are clearly visible above the Sun during Totality, and as it ends, a huge, bright Diamond Ring pops out – a real treat, and the brightest I’ve observed!

My weather station measures the temperature drop during the eclipse at only 1.5°C. I’m a bit surprised at how little the air cooled off, but I expect the air mixing at sea level reduced this effect similarly as it did with the 2012 Eclipse when I was aboard the Paul Gauguin in the Coral Sea. I don’t stick around to watch the last partial phase of the eclipse, packing up my gear and leaving by 9AM. Once 4th Contact is over, the ship turns around and heads south through the Makassar Strait to the Java Sea, heading to Komodo Island, our next port-of-call the day after tomorrow. This is a 500 mile run for them to get us on position this morning.

The captain and the rest of the bridge crew did an outstanding job getting us to the centreline of the eclipse this morning. The captain made his decision last night on our final position based on meteorological reports, and it worked out beautifully. We had some clouds, but there were huge gaps, and Totality was observed under perfectly clear conditions.

After getting cleaned up, I go up to the Explorations Cafe to have a celebratory cappuccino, since I missed breakfast this morning. That keeps me going, so I can quickly extract three photos and post a brief message on Facebook to tell my friends I had success with the eclipse. They almost immediately respond, saying that they virtually observed the eclipse from a feed coming from somewhere in Micronesia. It is a connected world!

Shortly after Noon, I go to the main dining room for some much-needed lunch, and compare notes about the eclipse with everyone around the table. We are all thrilled to have had the chance to observe the eclipse…both dedicated eclipse chasers and regular travellers alike. 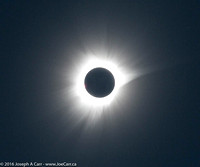