Before we leave East London this morning, we see a whale with its tail sticking vertically out of the ocean. As we drive through town, Craig points out the Mercedes assembly plant where most right hand drive vehicles are made for export to the rest of the world. We make a coffee stop in a quaint town called Bathurst, where we are served some lovely scones and coffee in a garden cafe.

Next stop is Grahamstown, where many of us tour of the Observatory Museum. There is a reflecting telescope and a working camera obscura in a tower on top of the museum. Both were acquired and built by an early English settler to this area called H.C. Galpin. He made a living as a watch and clock maker.

Craig tells us Grahamstown is safe to wander around in, so our group spreads out to take advantage of the shopping and banking. I try to use my Canadian bank card in one bank, but the machine rejects it. I walk down the street to another bank where the bank machine works fine for me. Lunch is on our own account today, so I stop by a bakery and pick up a very nice deli sandwich for 9.50 Rand (US$1.15). On our way out of Grahamstown, we stop to see the 1820 Settlers National Monument, which offers a good view of Grahamstown from high on a hill, but it really doesn’t have much else to offer.

We have a fairly long drive to Port Elizabeth, with the salt ponds and new harbour appearing just north of the city as we approach it. Port Elizabeth is a busy city, and it’s residents are quite affluent. We are officially now on the Garden Coast. The vegetation is much greener than before, and the rivers are no longer dry. Huge farms that appear to be very productive are visible along the expressway, and there are some spectacular sandy beaches as well. We are staying at the Paxton Hotel in Port Elizabeth – a modern hotel located next to the rail yard and main road. After check-in I order a Beck’s beer from the bar, which costs 16 Rand (US$2.25).

We leave for dinner as a group this evening and drive to 34° South – a restaurant Craig recommends, which is located in a casino complex. The dinner service takes over two hours for some of our group, however I am served right away, and since the couple I’m seated with this evening don’t speak very good English, I finish quickly and have well over an hour to kill after the meal. I always find people watching to be a fascinating pastime when I travel, and this evening is no exception. I sit at the bar so I have a good vantage point and order a cappuccino. The barman sings to himself as he works, and is quite cute as well, which keeps me entertained until we board the bus to return to the hotel.

The Paxton Hotel has wireless Internet access available in each room, so I take advantage of this to catch up with my email and JoeTourist travel blog. 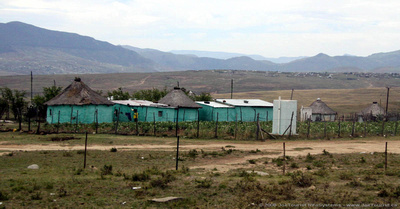 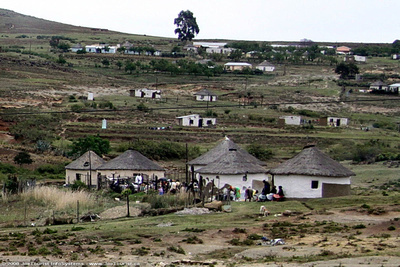 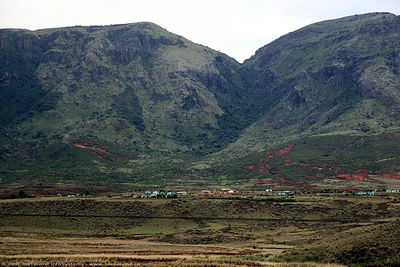 Settlements up against the mountains in Transkei Province 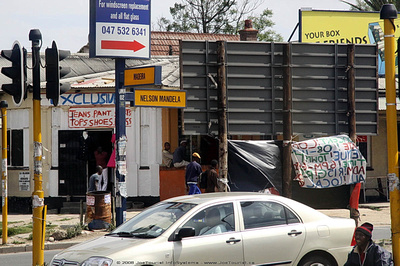 Sunday soccer game near Qunu, the birthplace of Nelson Mandela

Settlements in the Transkei 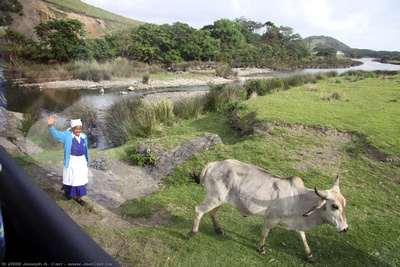 A woman and her cow alongside the highway 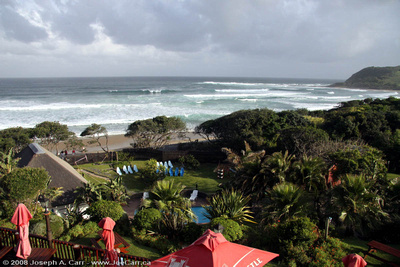 View of the beach and the Indian Ocean from the hotel 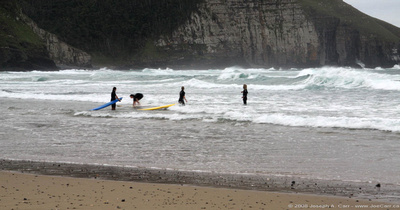 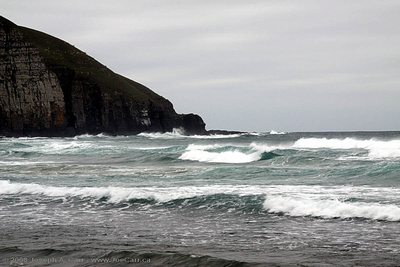 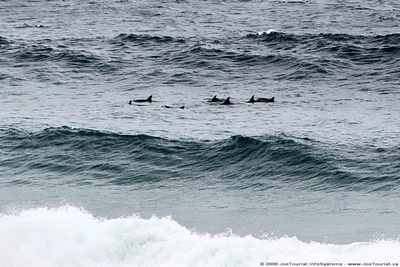 Porpoises near the surf line 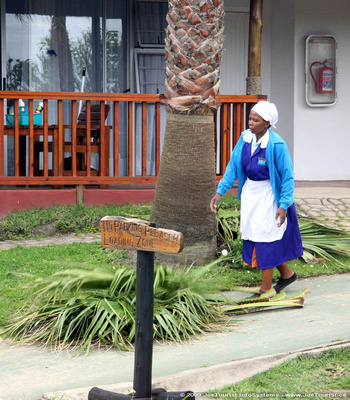 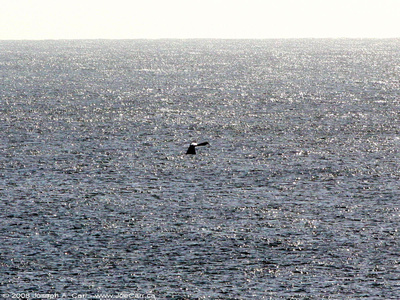 A whale with its tail sticking vertically out of the ocean 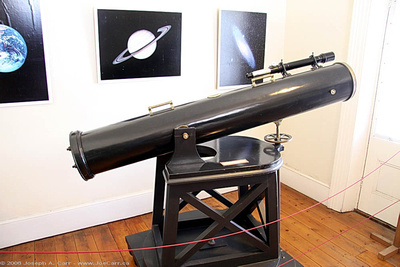 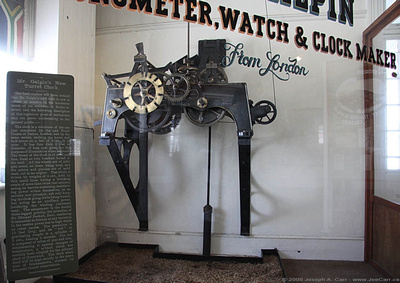 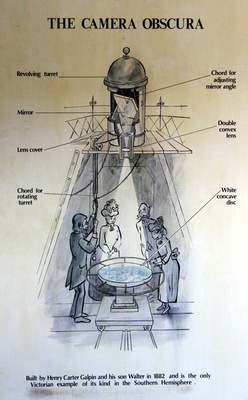 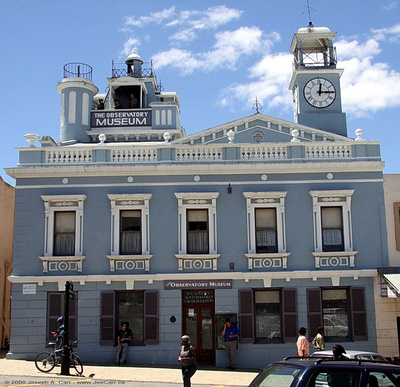 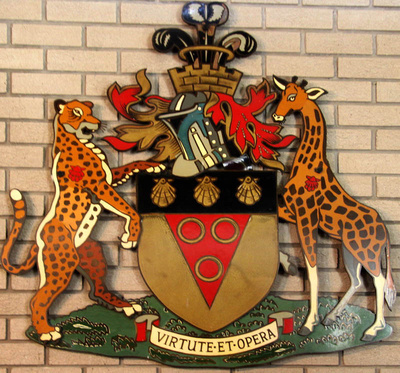 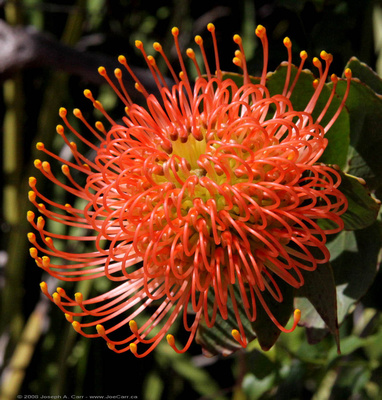 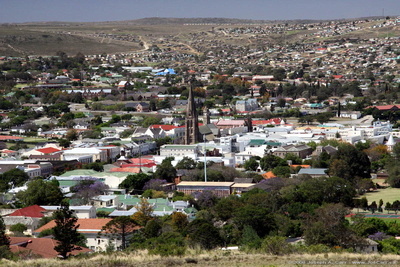 View of Grahamstown from the Monument 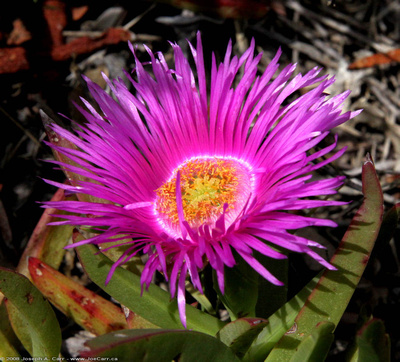 The salt flats north of the city 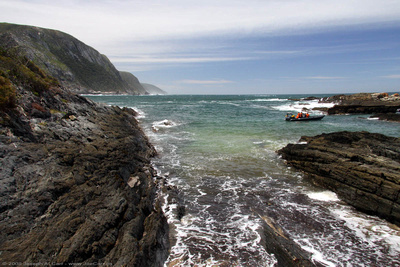 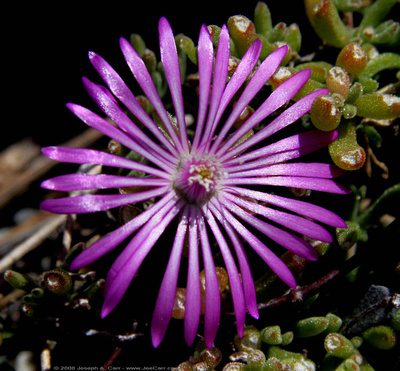 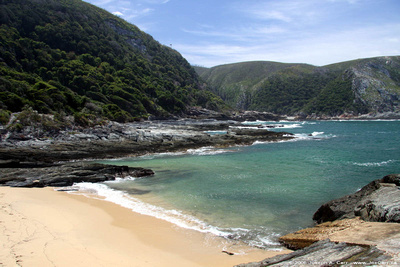